Made In Hemp is thilled to offer this fantastic range of bamboo clothing, made by our friends at Kingston Grange in partnership with the Warlukurlangu Artists Aboriginal Corporation.

Warlukurlangu Artists Aboriginal Corporation (Warlukurlangu) is an Indigenous organisation that creates, promotes and preserves Aboriginal heritage and culture of Warlpiri people. It is a major source of employment for the artists in the region and works towards empowering their social and economic wellbeing through the production, marketing and distribution of their visual arts and crafts.The organisation provides sustainable and culturally appropriate employment opportunities to alleviate disadvantages and poverty in surrounding communities. It conducts professional development workshops which provides artist with an opportunity to learn new skills and techniques and experiment with different media.

For more information on this fantastic corporation, please check out their website - https://warlu.com/

These are their stories -

Janganpa Jukurrpa (common brush-tail possum [Trichosurus vulpecula] Dreaming) travels all over Warlpiri country. ‘Janganpa’ are nocturnal animals that often nest in the hollows of white gum trees (‘wapunungka’). This story comes from a big hill called Mawurrji, west of Yuendumu and north of Pikilyi (Vaughan Springs). A group of ‘janganpa’ ancestors resided there. Every night they would go out in search of food. Their hunting trips took them to Wirlki and Wanapirdi, where they found ‘pamapardu’ (flying ants). They journeyed on to Ngarlkirdipini looking for water. A Nampijinpa women was living at Mawurrji with her two daughters. She gave her daughters in marriage to a Jupurrurla ‘janganpa’ but later decided to run away with them. The Jupurrurla angrily pursued the woman. He tracked them to Mawurrji where he killed them with a stone axe. Their bodies are now rocks at this place. Warlpiri people perform a young men’s initiation ceremony, which involves the Janganpa Jukurrpa. The Janganpa Jukurrpa belongs to Jakamarra/Jupurrurla men and Nakamarra/Napurrurla women. In Warlpiri paintings traditional iconography is used to represent this Jukurrpa. ‘Janganpa’ tracks are often represented as ‘E’ shaped figures and concentric circles are used to depict the trees in which the ‘janganpa’ live, and also the sites at Mawurrji.

The Wanakiji Jukurrpa (bush tomato [Solanum chippendalei] Dreaming) travels through Yaturlu (near Mount Theo, north of Yuendumu). “Wanakiji” grows in open spinifex country and is a small, prickly plant with purple flowers that bears green fleshy fruit with many small black seeds. After collecting the fruit the seeds are removed with a small wooden spoon called ‘kajalarra’. The fruit then can be eaten raw or threaded onto skewers called ‘turlturrpa’ and then cooked over a fire. ‘Wanakiji’ can also be skewered and left to dry. When they are prepared in this way it is called ‘turlturrpa’ and the fruit can be kept for a long time. In contemporary Warlpiri paintings traditional iconography is used to represent the Jukurrpa, particular sites and other elements. The Wanakiji Jukurrpa belongs to Napanangka/Napangardi women and Japanangka/Japangardi men. This ‘Jukurrpa” (Dreaming) comes from Mina Mina, a very important women’s Dreaming  site far to the west of Yuendumu near Lake Mackay and the WA boarder. The ‘kirda’ (owners) of this Dreaming are Napangardi/Napanangka women and Japangardi/Japanangka men; the are is sacred to Napangardi and Napanangka women. There are a number of ‘mulju’ (water soakages) and a ‘maluri’ (clay pan) at Mina Mina.

In the Dreamtime, ancestral women danced at Mina Mina and ‘karlangu’ (digging sticks) rose up out of the ground. The women collected the digging sticks and then travelled on the east, dancing, digging for bush tucker, collecting ‘ngalyipi’ (snake vine [ Tinospora smilacina]), and creating many places as they went. ‘Ngalyipi’ is a rope like creeper that grows up the trunks and limbs of trees, including ‘kurrkara’ (desert oak [Allocasuarina decaisneana])/ It is used as a ceremonial wrap and as a strap to carry ‘parraja’ (coolamons) and ‘ngam’ (water carriers). ‘Ngalyipi’ is also used to tie around the forehead to cure headaches, and to blind cuts.

The women stopped at Karntakurlangu, Janyinki, Parapurnta, Kimayi, and Munyuparntiparnti, sites spanning from the west to the east of Yundumu. When they stopped, the women dug for bush foods like ‘jintiparnts’ (desert truffle [Elderia arenivaga]). The Dreaming track eventually took them far beyond Warlpiri country. The track passed through Coniston in Anmatyerre country to the east, and then went on to Alcoota and Aileron far to the northeast of Yuendumu and eventually on into Queensland. 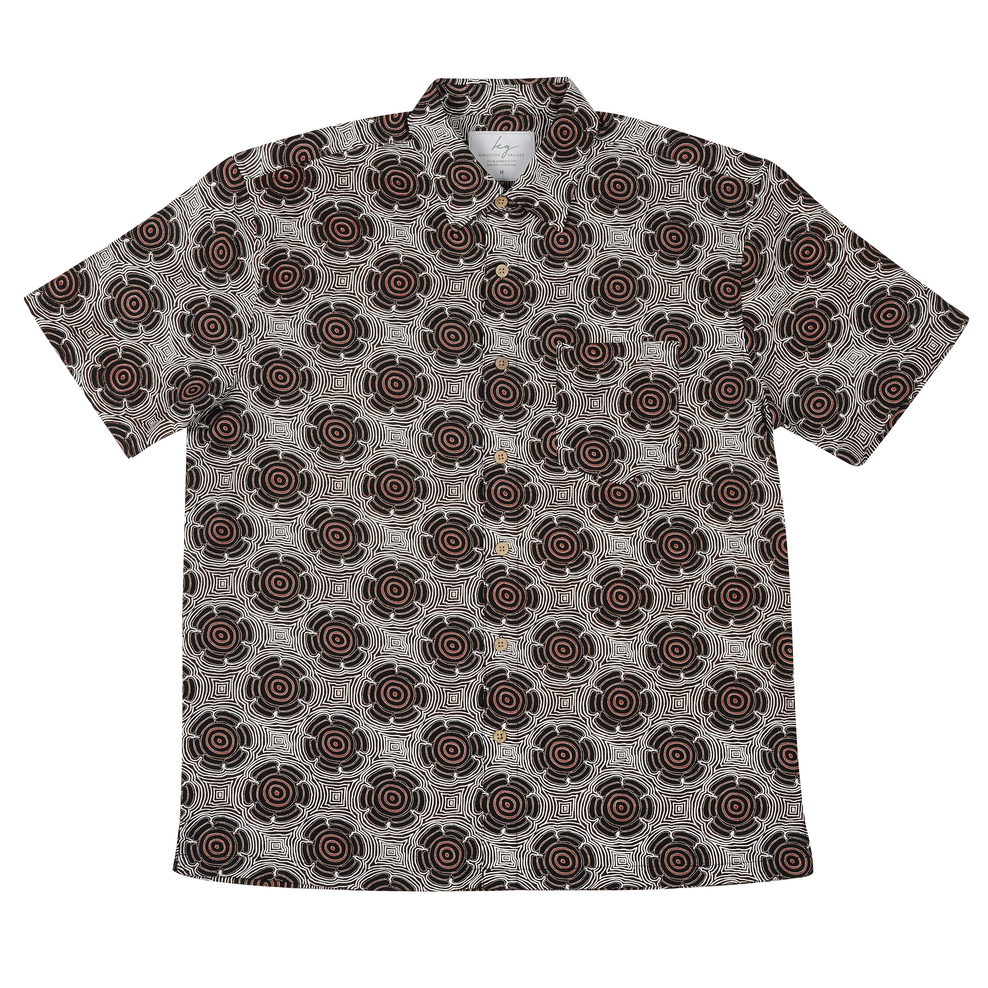 This painting depicts the Pamapardu Jukurrpa (Flying Ant Dreaming) from Wapurtali, west of Yuendumu. ‘Pamapardu’ is the Warlpiri name for the flying ants or termites that build the large anthills found throughout Warlpiri country. This country belongs to Nakamarra/Napurrurla women and Jakamarra/Jupurrurla men. ‘Pamapardu’ are flying ants. They build earth mounds (‘mingkirri’) that are common in the Tanami area. When heavy rains come in summer the ‘mingkirri’ get flooded out, so the ‘pamapardu’ grow wings and fly off to make new homes, following their queens to dry mounds or to build a new. When they have found their new home, they drop their wings. In this stage they can be collected, lightly cooked in coals and eaten. As they fall to the ground women collect them to eat because they are nice and sweet. In contemporary Warlpiri paintings traditional iconography is used to represent the Jukurrpa, particular sites and other elements. When this Jukurrpa story is painted concentric circles are used to represent the ‘mingkirri’ and the rock holes involved in the story, including the central one at Wapurtali (Mt Singleton). Dashes are often depicted around the circles to represent the ‘pamapardu’.

This painting tells the story of a Jangala ‘watiya-warnu’ (Acacia tenuissima) ancestor who travelled south from a small hill called Ngurlupurranyangu to Yamunturrngu (Mount Liebig). As he travelled, he picked the ‘watiya-warnu’ seeds and placed them in ‘parrajas’ (food carriers), one of which he carried on his head. Watiya-warnu is a seed bearing tree that grows in open spinifex or mulga country. When people returned to their camp after collecting the seeds, they would make large windbreaks for shelter and winnow the seed in the late afternoon. Immature ‘watiya-warnu’ seed is ground into a paste and can be used to treat upset stomachs. The associated ‘watiya-warnu’ ceremony involves the preparation of a large ground painting. This Jukurrpa belongs to Nampijinpa/Nangala women and Jampijinpa/Jangala men. In contemporary Warlpiri paintings traditional iconography is used to represent the Jukurrpa, particular sites and other elements. In paintings of this Dreaming ‘U’ shapes are often depicting women collecting the ‘watiya-warnu’ seeds. Oval shapes represent the ‘parrajas’ where they carry the seeds and strait lines beside them frequently portrait digging sticks. Ben has painted a story deriving from his mother’s Jukurrpa, Dreaming in reference to the Duhwa Clan from Yirrkala, East Arnhem Land.

“Everything in the Yolnu world view is made up of two moieties. One is Yirritja and the other one is Dhuwa.

Dhuwa and Yirrita make up our world view. They are two halves of our holistic world view. Yirritja and Dhuwa fit together perfectly.

Welcome to our website. If you continue to browse and use this website, you are agreeing to comply with and be bound by the following terms and conditions of use, which together with our privacy policy govern Made In Hemp Pty Ltd’s relationship with you in relation to this website. If you disagree with any part of these terms and conditions, please do not use our website.

We are committed to ensuring that your privacy is protected. Should we ask you to provide certain information by which you can be identified when using this website, then you can be assured that it will only be used in accordance with this privacy statement.

We may collect the following information:

What we do with the information we gather

We require this information to understand your needs and provide you with a better service, and in particular for the following reasons:

We are committed to ensuring that your information is secure. In order to prevent unauthorised access or disclosure, we have put in place suitable physical, electronic and managerial procedures to safeguard and secure the information we collect online.

A cookie is a small file which asks permission to be placed on your computer's hard drive. Once you agree, the file is added and the cookie helps analyse web traffic or lets you know when you visit a particular site. Cookies allow web applications to respond to you as an individual. The web application can tailor its operations to your needs, likes and dislikes by gathering and remembering information about your preferences.

We use traffic log cookies to identify which pages are being used. This helps us analyse data about webpage traffic and improve our website in order to tailor it to customer needs. We only use this information for statistical analysis purposes and then the data is removed from the system.
Overall, cookies help us provide you with a better website by enabling us to monitor which pages you find useful and which you do not. A cookie in no way gives us access to your computer or any information about you, other than the data you choose to share with us.
You can choose to accept or decline cookies. Most web browsers automatically accept cookies, but you can usually modify your browser setting to decline cookies if you prefer. This may prevent you from taking full advantage of the website.

Links to other websites

Our website may contain links to other websites of interest. However, once you have used these links to leave our site, you should note that we do not have any control over that other website. Therefore, we cannot be responsible for the protection and privacy of any information which you provide whilst visiting such sites and such sites are not governed by this privacy statement. You should exercise caution and look at the privacy statement applicable to the website in question.

You may choose to restrict the collection or use of your personal information in the following ways:

If you believe that any information we are holding on you is incorrect or incomplete, please write to or email us as soon as possible at the above address. We will promptly correct any information found to be incorrect.